The Department sponsors an active and lively series of lectures with distinguished speakers from US and international universities. 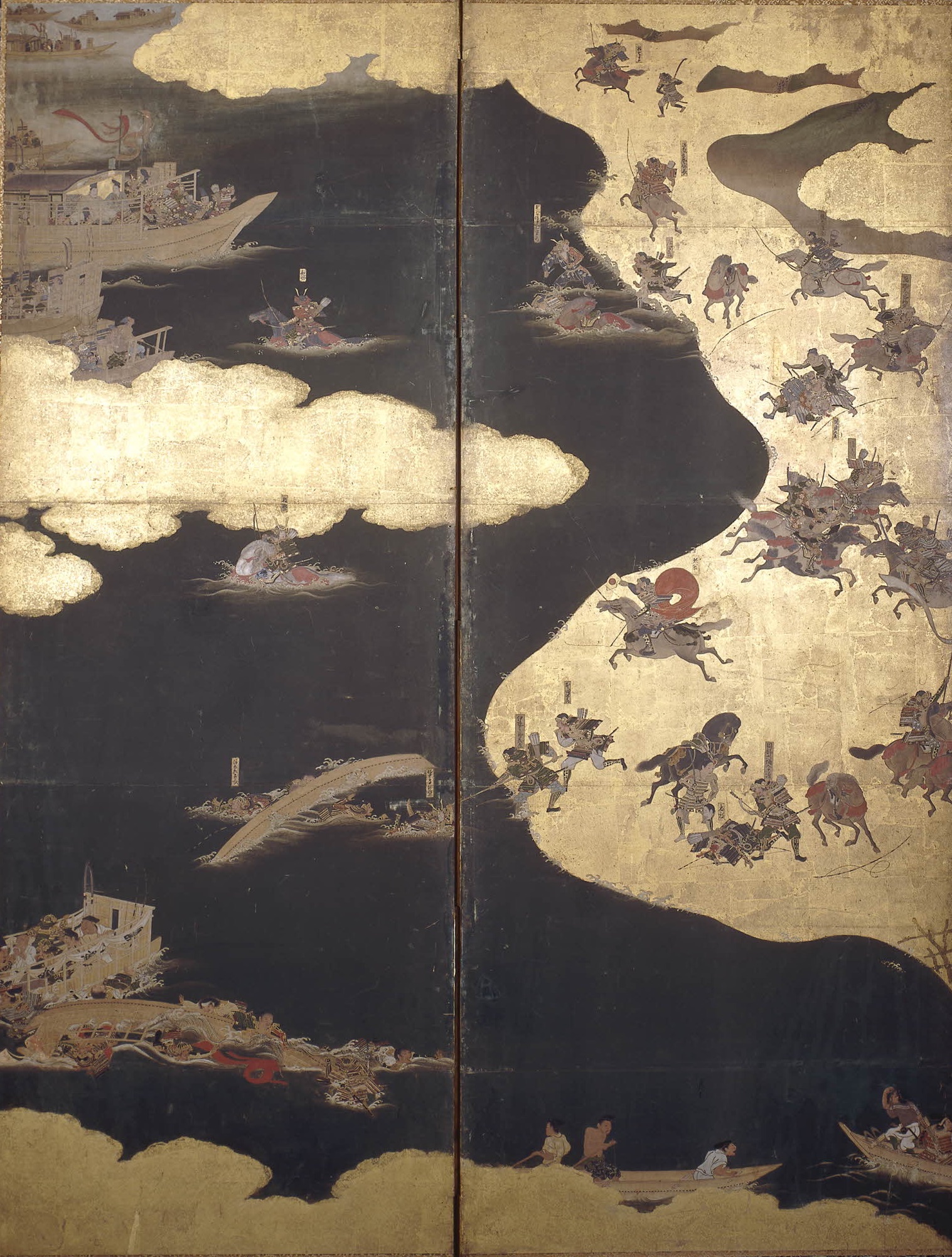 Naoko Gunji, “The Shogun’s New Iconography: Transformation of the Heike Paintings in the Tokugawa Period”

With the advent of early modern Japan, when the country was finally reunified after a century of war and strife, a great many paintings were produced to depict wars and battles.  These paintings were often commissioned by the new rulers of early modern Japan, the Tokugawa shoguns and their relatives.  Some of these battle paintings were about recent battles that the patrons and their fathers had won meritoriously.  A large number of them, however, depicted battles from the distant past, and in particular the Genpei War (1180-1185), a war that was fought five centuries earlier.  Using artwork from various important collections, Dr. Gunji’s talk will address the question of why the rulers of the Tokugawa period commissioned many pictures of the distant Genpei past.

The study of historiography as a literary form making distinct uses of emplotment and tropes has been a favored topic in the theory of history ever since Hayden White published his Metahistory: The Historical Imagination in Nineteenth-Century Europe (1973). Would it be equally possible to conceive of an Asian literary theory of narrative applicable to Asian history writing? Professor Kragh will here introduce the outcomes of a five-year research project devoted to this question, giving examples of how literary notions of plot, trope, and historicity drawn from classical Indian, Chinese, and Tibetan sources can be turned into a modern methodology for a narrativist study of Asian historical discourse. 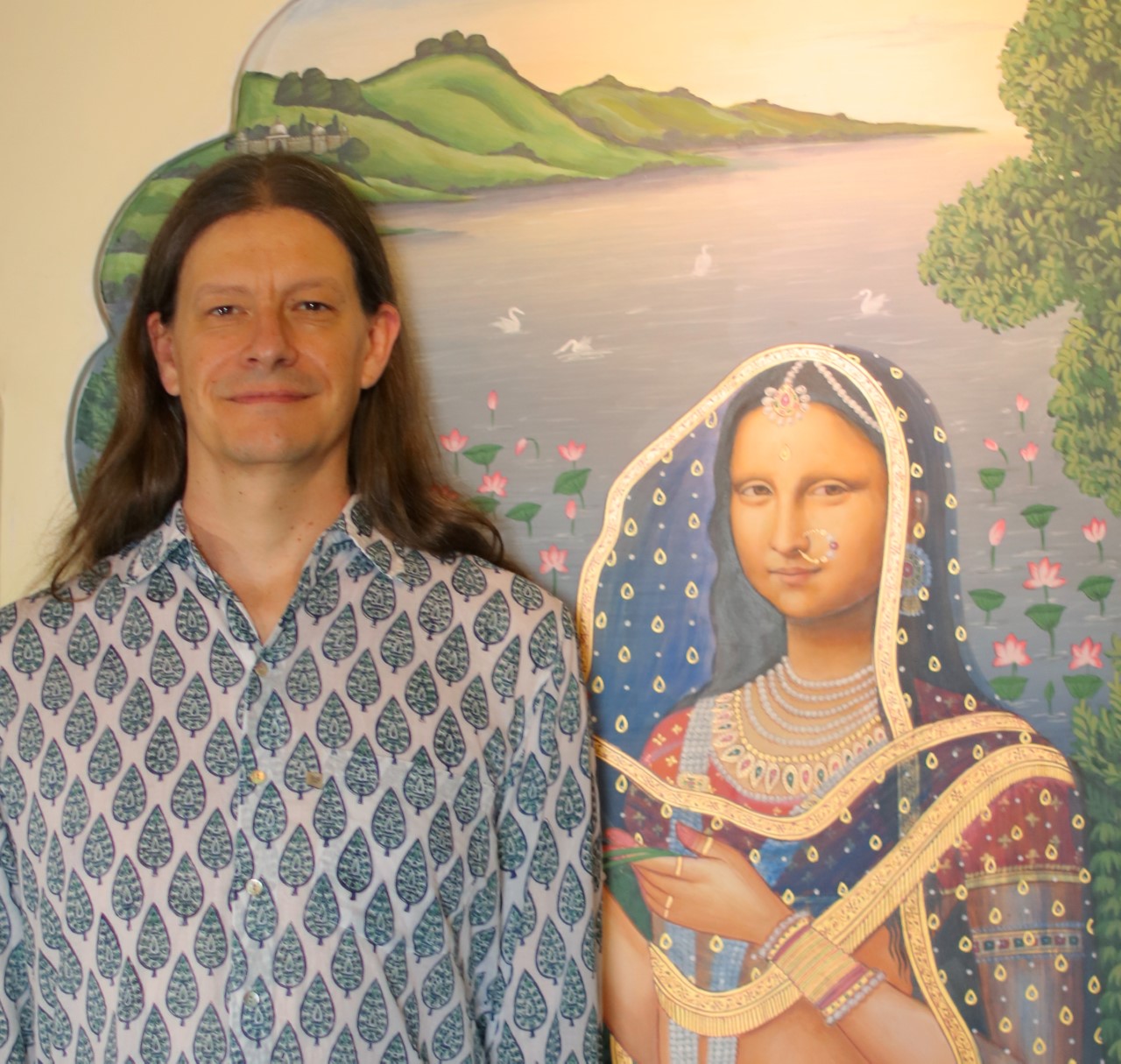 Koen De Ceuster (Leiden University), "In Their Own Words: North Korean Painters on Practicing Art in the DPRK" 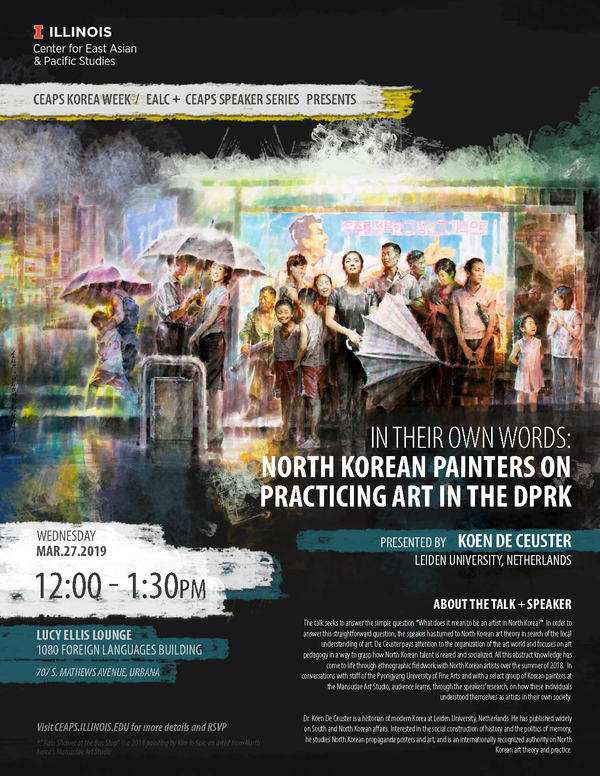 In this talk, I seek to answer the simple question “What does it mean to be an artist in North Korea?” In order to answer this straightforward question, I turn to North Korean art theory in search of the local understanding of art. I pay attention to the organization of the art world and I focus on art pedagogy in a way to grasp how North Korean talent is reared and socialized. All this abstract knowledge has come to life through ethnographic fieldwork with North Korean artists over the summer of 2018.  In conversations with staff of the Pyongyang University of Fine Arts and with a select group of Korean painters at the Mansudae Art Studio, I learned how these individuals understood themselves as artists in their own society.

Dr. Koen De Ceuster is a historian of modern Korea at Leiden University, Netherlands. He has published widely on South and North Korean affairs. Interested in the social construction of history and the politics of memory, he studies North Korean propaganda posters and art. He is an internationally recognized authority on north Korean art theory and practice. 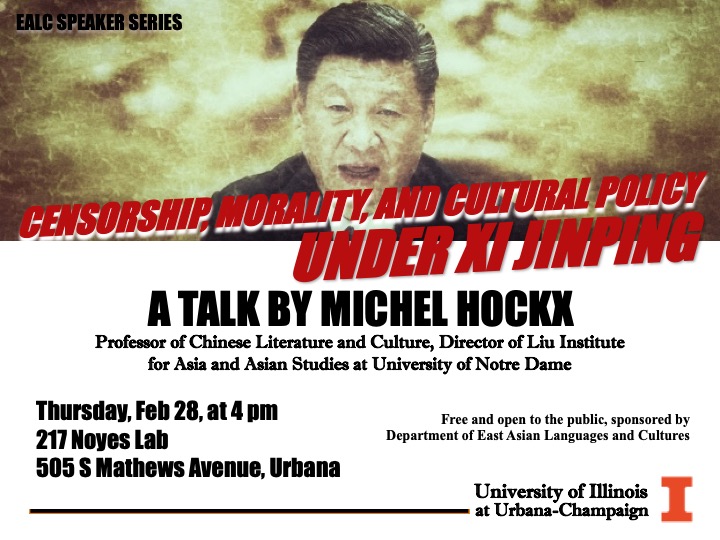 In October 2014, Chinese leader Xi Jinping held a widely publicized meeting with representatives of literary and artistic circles. A year later the full text of his speech at the meeting was published and became the foundation of PRC cultural policy. Western observers were quick to point out analogies between Xi’s meeting and the Yan’an forum of 1942, when Mao Zedong laid down the rules of art for the socialist period. Others opined that Xi’s speech had heralded a return to the policies of the Cultural Revolution. Yet a closer analysis of Xi’s text shows that he used his speech to reiterate and solidify a moralistic view of literature and art that has been the consensus in government circles since the start of the reform period in 1978. According to this consensus, cultural work is significant because it spreads the positive values of “truth, goodness, and beauty” – a triad well-known from the history of European philosophy and often used to build moralistic value systems. Xi Jinping and his speech writers awkwardly combine this traditional European view of the nature of art with a call for greater adherence to native Chinese traditions, and for patriotism.

This talk will trace the history of the triad “truth, goodness, and beauty” in modern Chinese cultural discourse and look in detail at its application in the formulation of cultural policy since 2014. It also looks at the effect of the discourse on cultural production and the shifting levels of tolerance for deviation from prescribed moral standards.

Michel Hockx is Professor of Chinese Literature in the Department of East Asian Languages and Cultures and Director of the Liu Institute for Asia and Asian Studies in the Keough School of Global Affairs at the University of Notre Dame. His monograph Internet Literature in China (Columbia UP, 2015) was listed by Choice magazine as one of the “Top 25 Outstanding Academic Titles of 2015.”

Mark Frank, "Hunger in the Making of a Modern Sino-Tibetan Borderland" 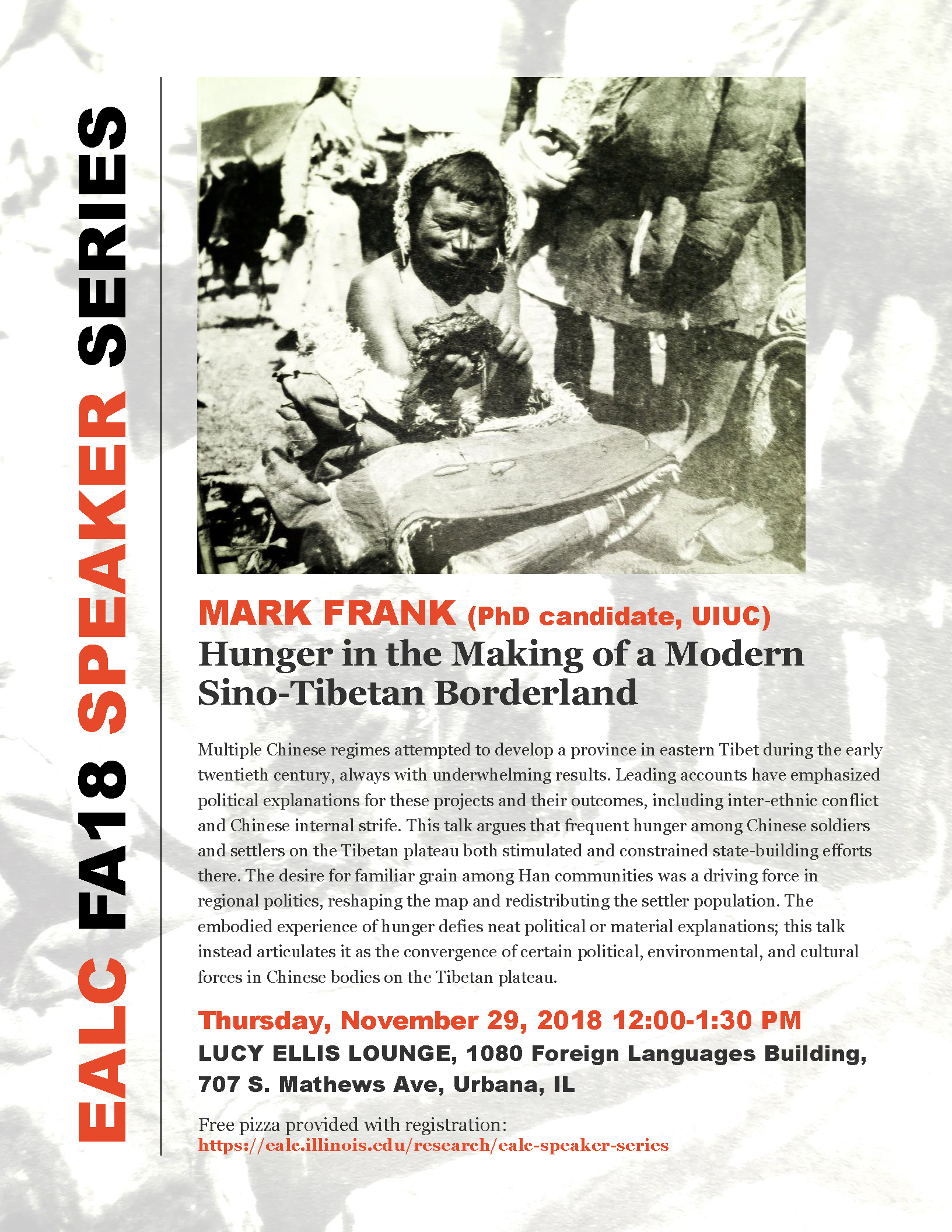 Multiple Chinese regimes attempted to develop a province in eastern Tibet during the early twentieth century, always with underwhelming results. Leading accounts have emphasized political explanations for these projects and their outcomes, including inter-ethnic conflict and Chinese internal strife. This talk argues that frequent hunger among Chinese soldiers and settlers on the Tibetan plateau both stimulated and constrained state-building efforts there. The desire for familiar grain among Han communities was a driving force in regional politics, reshaping the map and redistributing the settler population. The embodied experience of hunger defies neat political or material explanations; this talk instead articulates it as the convergence of certain political, environmental, and cultural forces in Chinese bodies on the Tibetan plateau.

Mark Frank is a PhD candidate in modern Chinese history at the University of Illinois. 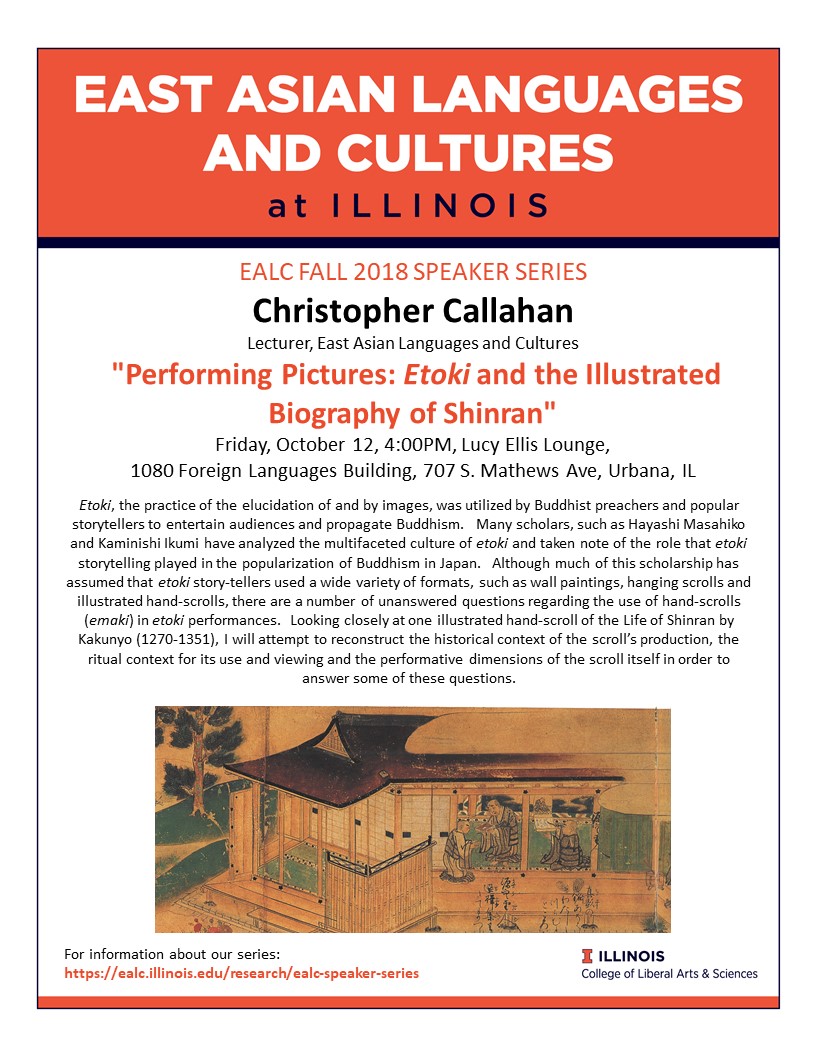 "Performing Pictures: Etoki and the Illustrated Biography of Shinran"

Etoki, the practice of the elucidation of and by images, was utilized by Buddhist preachers and popular storytellers to entertain audiences and propagate Buddhism.   Many scholars, such as Hayashi Masahiko and Kaminishi Ikumi have analyzed the multifaceted culture of etoki and taken note of the role that etoki storytelling played in the popularization of Buddhism in Japan.   Although much of this scholarship has assumed that etoki story-tellers used a wide variety of formats, such as wall paintings, hanging scrolls and illustrated hand-scrolls, there are a number of unanswered questions regarding the use of hand-scrolls (emaki) in etoki performances.  Looking closely at one illustrated hand-scroll of the Life of Shinran by Kakunyo (1270-1351), I will attempt to reconstruct the historical context of the scroll’s production, the ritual context for its use and viewing and the performative dimensions of the scroll itself in order to answer some of these questions.

Christopher Callahan lectures on Japanese and East Asian Religions in the Department of East Asian Languages and Cultures.

Hiromi Mizuno (University of Minnesota), "The Age of Nitrogen: Agricultural Modernization and Japan"

How Japan industrialized itself and joined the ranks of the world’s colonial powers by the beginning of the 20th century is a well told story, but how it fed the fast growing population and its industrial sector is little told or studied. Nitrogen, the important soil nutrient, supported the world's expansion of economy and population, sometimes driving the powerful West's colonialism. From dried fish in Hokkaido to soybean cakes in Manchuria to chemical fertilizer in colonial Korea, Japan's search for nitrogen too played a crucial role in Japan's modernization and colonial expansion. This talk is an environmental history of soil and agriculture and provides a fresh new perspective to Japan's modernization in the 20th century.

Hiromi Mizuno is Associate Professor of History at University of Minnesota, Twin Cities.

Yongming Xu is Professor of Chinese Literature at Zhejiang University and Assistant Director of Zhejiang Classical Texts Research Center. He obtained his obtained his Ph. D. from Zhejiang University in 2002. He has been a visiting scholar at Harvard-Yenching Institute and the Department of East Asian Languages and Civilizations, Harvard University. He has authored five monographs, edited six books, and compile and annotated several ancient texts. His publications include A Study of Wuzhou Literati from the Yuan to Early Ming; A Biography of Song Lian (1310-1381), Studies on Tao Zongyi; An Anthology of Critical Studies on Tang Xianzu in Western Scholarship (co-editor), Fang Guozhen historical materials; Tao Zongyi’s Collected Works; Zheng Yuanyou’s Collected Works; Wu Sidao’s Collected Works; and Hu Kui’s Collected Works. 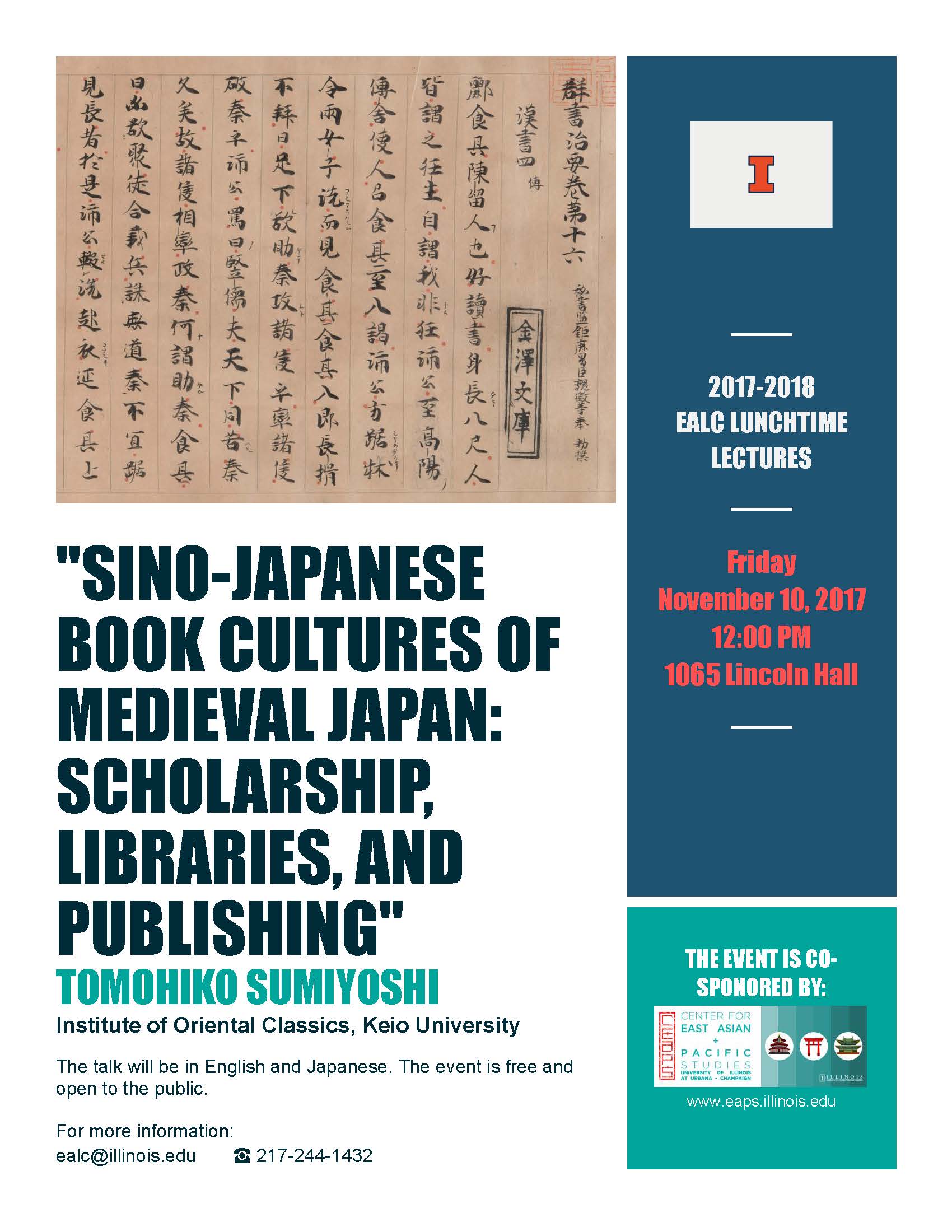 The talk will explore strategies to disseminate, study, and preserve Chinese-language books in Japan between 1400 and 1600.

Tomohiko Sumiyoshi is a Professor at the Institute of Oriental Classics (Shido Bunko), Keio University, Japan. He has published widely on the reception of books in Chinese in medieval Japan.

The talk examines how the making of pre-Tang poetry anthologies in sixteenth-century Ming China led to a reinvention of the early Chinese poetic tradition. Through the study of book titles, tables of contents, prefaces, and postscripts in twenty-two pre-Tang poetry anthologies compiled in the 1500s, I identify three types of anthologizing practices. By employing quantitative and network analysis, I historicize these practices, investigate the motivations for the anthologies, and explore their citation networks. These anthologizing practices gradually transformed the classification principles of previous anthologies, expanded the scope of canonized anthologies, and established a distinct pre-Tang tradition by the end of the sixteenth century.

Jing Chen is currently a PhD Candidate and an Instructor in the Department of East Asian Languages and Cultures at the University of Illinois, Urbana-Champaign. Her research interests include pre-1900 Chinese literature, classical Chinese poetry and poetics, as well as literary criticism in late imperial China. She is currently working on a project that studies the publication and reception of poetry anthologies in China from the 16th century to the 18th century.

Prasenjit Duara,"Sustainability and the Crisis of Transcendence: The Long View from Asia"

The crisis of global modernity has been produced by human overreach that was founded upon a paradigm of national modernization. Today, three global changes: the rise of non-western powers, the crisis of environmental sustainability and the loss of authoritative sources of transcendence – the ideals, principles and ethics once found in religions -- define our condition. The physical salvation of the world is becoming the transcendent goal of our times, transcending national sovereignty. The foundations of sovereignty can no longer be sought in tunnelled histories of nations; we are recognizing that histories have always been circulatory and the planet is a collective responsibility.

Prasenjit Duara is the Oscar Tang Chair of East Asian Studies at Duke University. Born and educated in India, he received his PhD in Chinese history from Harvard University. He was Professor of History and East Asian Studies at University of Chicago (1991-2008) and Raffles Professor and Director of Asia Research Institute at the National University of Singapore (2008-2015). His latest book is The Crisis of Global Modernity: Asian Traditions and a Sustainable Future (Cambridge 2014).

This event is co-sponsored by CEAPS.