Hailed as the Asia Century, the 21st century presents new challenges to students preparing to build a career in an increasingly multipolar and multicultural world. Two of the three largest economies are already in East Asia.  Japanese anime, K-pop, Chinese film enjoy a global appeal.  China, Japan, and South Korea are among the top five countries with the most international patent applications.  The growing importance of East Asia in the 21st century offers exciting opportunities  and challenges to students seeking successful careers across every field of endeavor. 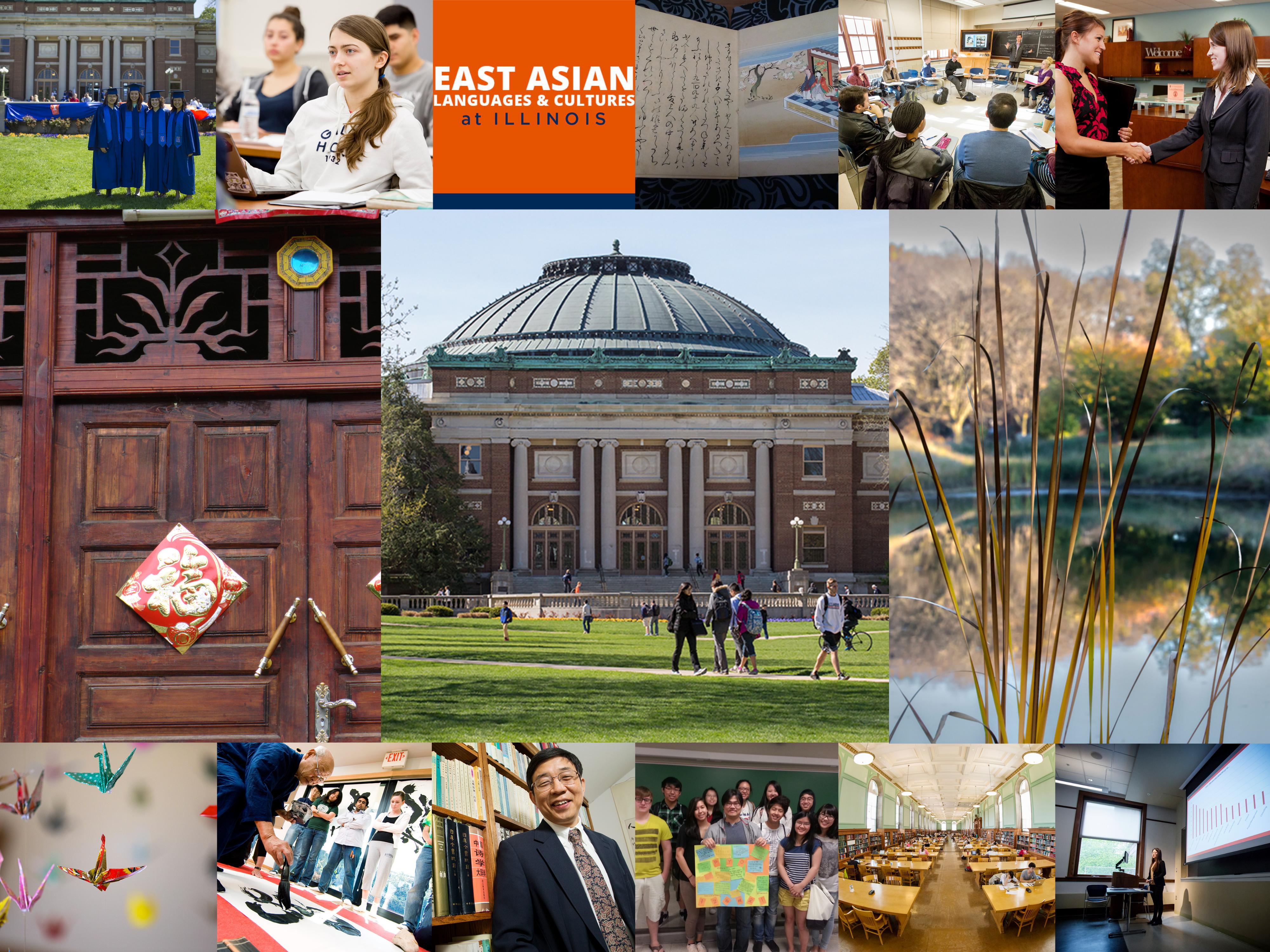 East Asian Languages and Cultures is an interdisciplinary department in the School of Literatures, Cultures and Linguistics of the College of Liberal Arts and Sciences at UIUC. The department offers the Bachelor of Arts (B.A.) major and minor, Master of Arts (M.A.), and Doctor of Philosophy (Ph.D.) degrees. The department offers courses in the languages, literatures, societies, and cultures of China, Japan, and Korea. The Department's own rich offerings are supplemented by courses taught by the Department of Religion, Anthropology, Political Science, History, Linguistics, Comparative & World Literature, Media and Cinema Studies, Sociology, and Gender & Women's Studies.

The study of East Asia is enriched at the University of Illinois by a wealth of campus resources. These include the collections of the International and Area Studies (IAS) Library, the Architecture and Art Library, and the Law Library; the Center for East Asian and Pacific Studies; the Asian Educational Media Service; Japan House; the collections of the Krannert Art Museum and the Spurlock Museum; the musical and dramatic programs of the Krannert Center for the Performing Arts; and the film collections of the Unit for Cinema Studies and the Undergraduate Library's Media Collection.

The Department offers numerous opportunities for language study in China, Japan, and Korea. We directly administer the Year in Japan Program that has sent more than 600 students to Japan since 1975. Now this program offers options for students to earn 16 credit hours per semester in Japanese language and Japanese cultureThe Resident Director on site is faculty at EALC or American scholars from consortium universities (University of Arizona, University of Hawaii and University of Pittsburgh). The University of Illinois is a also a member of the consortium governing the Inter-University Center for Japanese Language Studies in Yokohama. Our students also participate in intensive-language training programs in China and Korea under University of Illinois exchanges: the US-China Exchange with Beijing University, and the Nanjing Exchange with Nanjing University; and, through the University's Study Abroad Office, at Yonsei University in Seoul.

The University of Illinois at Urbana-Champaign has long enjoyed a national and international reputation as a center for East Asian studies. Courses on East Asia were offered at the University shortly after World War II, and during the early 1960s the University of Illinois became one of an elite group of research universities in the United States to establish a formal Center for Asian Studies, which offered instruction in the languages, literatures, and cultures of Asia and granted both graduate and undergraduate degrees.

The Department of East Asian Languages and Cultures expects to enjoy continued growth, as the University of Illinois is strongly committed to the future of East Asian studies on its campus. That commitment is evident in the continued activities of the Center for East Asian and Pacific Studies and in the UIUC Library collection, which, with more than 200,000 volumes in Chinese, Japanese, and Korean, ranks among the top East Asian collections in the country.

Campus facilities at the University of Illinois at Urbana-Champaign are among the most accessible in the nation for disabled persons, and applications from persons with disabilities are always welcomed. The Division of Disability Resources and Educational Services (DRES) coordinates services for U of I students with disabilities. For further information, contact DRES at 1207 South Oak Street, Champaign, IL 61820, phone: (217) 333-4603 (V/TDD).